on July 03, 2018
Today while the children were playing outside I discovered a moth on the step. It seemed very still so I nudged it with a stick, it didn't react at all, it was clear that the creature was no longer alive. I thought for a  moment about brushing the creature under the steps to spare the children being exposed to such a difficult topic, but after some thought I decided that taking time to respectfully observe the creature would be beneficial. 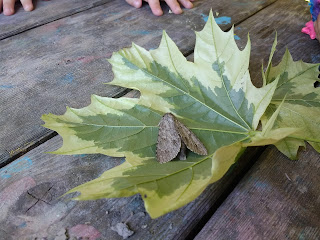 "Would you guys like to see something cool?" I called.

D (the eldest) was eager to help me pick up the moth and put him on a leaf. (1.9 Interacting with Adults - ELECT page 45) 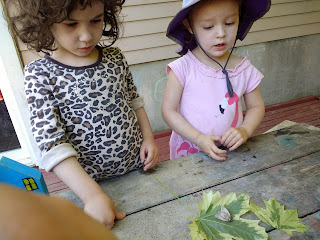 "I think he's alive, I think I see him moving," D said. I explained that he looked like he was moving because his leg was stuck to the leaf which was moved, but he wasn't alive any more; we could look at him as long as we were respectful because at one time he was a living creature. 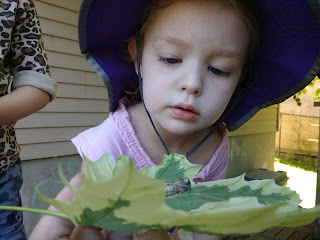 C talked a little bit about her understanding of death as we looked at the small insect. "His body doesn't work any more," she explained. (4.7 Reflecting and Reaching Conclusions - ELECT page 53) 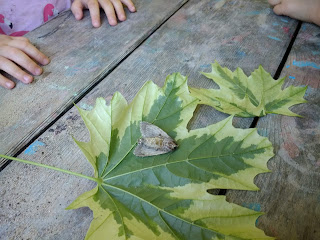 We looked closely at the underside of the moth; its tongue was sticking out which gave us an opportunity to remember how butterflies and moths eat. We remembered our own butterflies that we had hatched in the spring and we hoped that they were doing well. These little ones have such wonderful, big hearts! 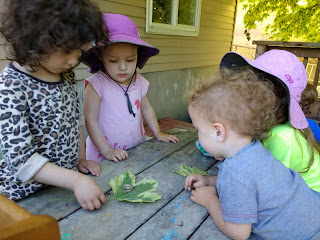 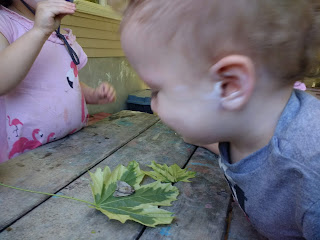 It was interesting to hear the knowledge the children already had about this topic;  they really have so much to share when given the opportunity to lead the discussion.

"He'll go back to the ground to help the plants grow, it's a circle," D explained (4.9 Reasoning Logically - ELECT, page 54)

What a beautiful way to express it.

Goodbye little moth, thank you for sharing the wonder of your existence with my little friends.

We respectfully returned him to the ground so that he could be part of the circle.
Interacting with Adults Reasoning Logically Reflecting and Reaching Conclusions 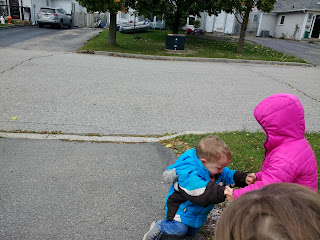 C, I watched you help a friend who had fallen on our walk. You saw that A was feeling sad and hurt (2.3 Empathy, ELECT Document page 36) and you wanted to help him to feel better (1.4 Helping Skills, ELECT Document, page 43).


Everyday I am impressed by the kindness and gentleness you share in the class, C. You have a beautiful heart and I'm so happy you feel comfortable to share it with the world. Three things in human life are important: the first is to be kind; the second is to be kind; and the third is to be kind. – Henry James We have such a caring culture in our classroom environment and I hope that each little person carries that with them when they move on to other adventures in their lives. 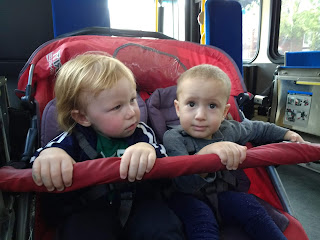 The Wheels on the Bus (A Learning Story)

When you think about what a learning environment looks like the inside of a city bus is not likely to immediately pop into your mind. However, because children are so intrinsically motivated to learn any space can hold thousands of new discoveries. Today I took the time to slow down and really observe all of the learning that takes place on what, to most people, would appear the most mediocre part of our excursions.

Recognizing Numbers
Before we board the bus we have to figure out which one is the right one! We all take some time to look at the number of the bus we are waiting for on the map, then we identify it together when the buses arrive at the stop (4.5 Representing Numbers, ELECT).
Following Directions
The children at Red River ELC have had lots of practice boarding the bus because it is one of our main means of transportation for field trips. They are able to understand and follow oral directions (3.6 Listening to Others, ELECT), with a few reminders, and do a great job finding a …